Subscribe
Share This
Commish & the Cardinals: The day Will Clark came to blows with the Secret Weapon
0 Comments
Share this
By Rick Hummel St. Louis Post-Dispatch

Last weekend, the San Francisco Giants retired the number of first baseman Will Clark, prompting us to take a look back at one of Clark's most notorious moments involving a brawl at Busch Stadum in 1988.

Dutch Rennert, the second-base umpire that day, was considered among the best ball-and-strike arbiters. But he missed something in the brawl.

Ozzie Smith, rushing to the defense of Jose Oquendo, threw a wild, roundhouse punch which missed its mark, and a few slaps that didn’t. But he wasn’t ejected, as Oquendo and Will Clark were, because Rennert said he didn’t see it.

It took 12 years, but Oquendo and Clark eventually buried the hatchet. When Clark joined the Cardinals late in the 2000 season from Baltimore, he and Oquendo, who had become a Cardinals coach, reminisced about the 1988 scuffle.

We welcome readers to STL Pinch Hits with an exclusive look back at some of the top games from my career on the beat. Here's my coverage from that day.

San Francisco’s Rick Reuschel was on his way to his 25th career shutout when suddenly, a hockey game broke out at Busch Stadium.

Reuschel eventually would get a 5-0 shutout over the Cardinals, but not before there were two bench-clearing incidents in the eighth inning, including one honest-to-goodness baseball fight.

The Cardinals had two lightweights in the ring — Jose Oquendo and Ozzie Smith — against San Francisco heavyweight Will Clark. Just when the Giants-Cardinals rivalry, spawned by a bench-clearer here two Julys ago, is kicking up again, the season series is over.

“I don’t think we’ll be seeing them in October,” Cardinals manager Whitey Herzog said, referring to the teams’ respective standings in the National League.

“A break for the umpires,” crew member Dutch Rennert said.

The brawl started in the eighth inning when Candy Maldonado grounded to Smith with one out. Clark, running from first, made contact with second baseman Oquendo by sliding into him about six to eight feet past the bag after the forceout.

As Oquendo and Smith loomed over Clark, the following scenario took place:

Oquendo kicked Clark and then cuffed Clark’s helmet with his hand. Clark, his attention having been obtained, jumped to his feet and grabbed Oquendo.

Smith, coming to the rescue, landed a punch from behind and then missed a roundhouse punch. Smith got in two more blows as Oquendo and Clark continued grappling, with Clark gaining the upper hand.

Maldonado, flying in from the right side, apparently gave Smith a shot that split Smith’s lip. Tom Pagnozzi, who came from the Cardinals’ bullpen, wrestled Maldonado to the ground.

Meantime, two more Cardinals, third baseman Terry Pendleton and reliever Scott Terry, had joined the fray to try to serve as peacemakers and the Giants’ Mike Aldrete had taken Smith to the ground.

Crew chief Frank Pulli finally got hold of Smith, who was having subsequent jawing sessions with the Giants’ Bob Brenly, an old favorite of his, and Chris Speier.

Terry was to be involved again two pitches later. His first pitch to Aldrete was high and outside and the second pitch was high and very inside. Home-plate umpire Randy Marsh ejected Terry because he thought it was an obvious brushback pitch and the Giants bench emptied again. The Cardinals bench quickly followed suit.

This time, Brenly and Smith were engaged in verbal abuse near the third-base bag but there were no punches thrown. The rest of the game continued without incident, although there were police on the field.

Oquendo said, “I was just trying to get out of the way and I didn’t think that was a right slide. (Clark) slid late. I was ticked off.”

Clark had slid hard into second two nights before on a potential double-play ball and Herzog had questioned second-base umpire Marsh’s call then.

“Both times, there’s no dirt where he slid on the first-base side of the bag,” Herzog said.

“The rule states that you can slide on the first-base side of the bag and your momentum can carry you on that side of the bag. But you cannot break up a double play and your first mark be on the other side of the bag. They didn’t call it, so (Clark) did it again. I told them if they had called it the other night, this stuff wouldn’t have happened.”

Of Oquendo’s and Smith’s retaliations, Herzog said, “Any shortstop and second baseman would do the same thing. You can get your knees hurt bad.”

When Herzog’s complaint was repeated to Rennert, he said, “(Clark) didn’t slide out of the baseline. He slid over the base. Straight and directly. A hard slide. Baseball can be a hard game. He’s got a gripe, but . . . that’s all you’ve got to do — slide directly over the bag.”

Pagnozzi said Clark should have expected something to happen to him.

“Jose was doing what he’s got to do,” Pagnozzi said. “If Will Clark continues to slide like that, somebody will take care of him. It’s just a matter of time. Nobody slides that far through the bag. He’s going to get somebody hurt if he doesn’t get hurt before. Somebody might drop down (on a throw) and smoke his noggin.”

As for others who might have been occupied during the main event, pitcher Joe Magrane said he was talking to his stockbroker and Dan Quisenberry said he was playing Henry Kissinger. He said he confronted an opponent but declined battle “because he looked like Mike Tyson.”

Quiz: How much do you know about these Cardinals trades?

Test your knowledge of some of the epic deals that were pulled off by Bing, Mo, the White Rat and others.

Commish & the Cardinals: The Sutter-Schmidt showdown of 1982

Bruce Sutter’s critical double play on Mike Schmidt was pennant-race baseball at its best on Sept. 14, 1982.

Commish & the Cardinals: The day Ozzie Smith made his greatest catch

The 1967 Cardinals had one of the most dominant lineups in Cardinals history - but the team was seeking an identity. They found that, courtesy of first baseman Orlando Cepeda.

11 years ago, the Colby Rasmus trade was ripped as a 'terrible organizational move.' But it resulted in a championship

On July 27, 2011, that the Cardinals made a trade that sent outfield Colby Rasmus to the Toronto Blue Jays in a move that bolstered the Cardinals bullpen

Quiz: How much do you know about your Cardinals broadcasters?

The Cardinals have had some of the most colorful announcers in the history of sports. Test your knowledge of the men in the booth.

Commish & the Cardinals: The night Cesar Cedeno came to the rescue

The most memorable games, as covered by Hall of Famer Rick Hummel of the St. Louis Post-Dispatch. Today we look at the September game in which Cesar Cedeno crushed the Mets.

Former San Francisco Giants player Will Clark salutes the crowd as he is introduced for the ceremony to retire his jersey No. 22 before a baseball game between the Giants and the Chicago Cubs in San Francisco, Saturday, July 30, 2022. 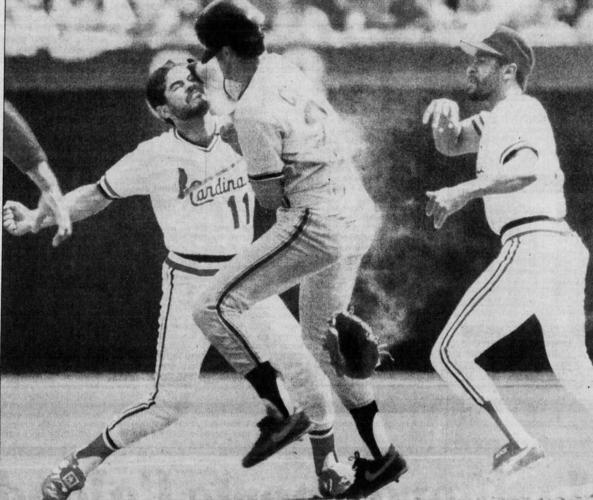