Hall of Fame writer Rick Hummel welcomes readers to STL Pinch Hits with an exclusive look back at some of the top games from his career on the beat.

Today we look back at the World Series game from Oct. 15, 1982. Here is Rick Hummel's original take:

MILWAUKEE -- There have been 79 World Series involving some 400 games and almost 4,000 players. But Willie McGee, a Cardinals rookie with a penchant for excitement, daring and occasional anguish, had a game for the ages Friday night.

''I don't know if anybody ever played a World Series game better than he did," said Manager Whitey Herzog after the Cardinals' 6-2 victory over the Milwaukee Brewers in the third game of the World Series.

The Cardinals now lead the series, two games to one, with the fourth game scheduled for this afternoon.

His second hit was a solo home run, even farther to right field, in the seventh inning. Meantime, he made an extraordinary leaping catch of Paul Molitor's drive to deep center in the first inning and an almost incomprehensible home-run saving grab of Gorman Thomas' blast in the ninth.

Players on opposing teams have kiddingly called McGee ''E.T. this season, saying he resembles the movie character. The name is something that McGee does not enjoy, and he relished it even less when he heard that Howard Cosell had brought it up on network television the other night.

''I don't appreciate it very much, 'he said. ''Why should somebody want to change your name? It's like changing your life. '

But McGee had a night not often enjoyed by anybody on this planet. And E.T. was a lovable character who earned some $60 million for those who hatched him.

Despite McGee's extra-terrestial display, the Cardinals faced a near- disaster in the seventh inning when Ted Simmons lined a single off the right leg of Cardinals starter Joaquin Andujar. Andujar crumpled to the ground and thrashed about as if he had winged by an M-16; it was feared that he had suffered a broken leg or kneecap.

''I don't know what I was thinking, but the pain was driving me crazy, 'Andujar said later.

Andujar was taken to Mount Sinai Hospital in downtown Milwaukee, where X-rays proved negative. Dr. Stan London and trainer Gene Gieselmann reported that the injury was merely a bruise below the knee and that Andujar would be able to pitch in a seventh game, if necessary, on Wednesday in St. Louis.

''I'll be all right -- I'll be ready when they need me, 'said Andujar, who returned to his hotel room after leaving the hospital.

After Andujar was carried from the field by pitcher John Stuper and non- roster rookie Gene Roof, he was administered to by Dr. London.

''Dr. London moved the knee around just a hair, 'said Keith Hernandez, ''and he was screaming. I was very concerned. It scared me to death. '

Rookie Dave LaPoint was scheduled to face Milwaukee's Moose Haas this afternoon at 12:20 in the fourth game of the Series. In the fifth game tomorrow, Bob Forsch, the first-game loser, will match up with Mike Caldwell, who threw a shutout in the first game.

If there is a sixth game, rookie John Stuper probably will pitch. When Herzog was asked what he would do if Andujar couldn't pitch next week, he said, ''We'd better pray for about three or four days of rain. '

Vuckovich, who was traded by the Cardinals to the Brewers in 1980, matched Andujar for four innings. The only hit off the Brewers righthander was an infield single on which umpires Jim Evans and Dave Phillips gave confusing signs.

Evans, at third base, shot his hands upward and then pointed them toward fair territory. Phillips, at first base, when he saw Evans' hands go skyward, did the same with his hands, seemingly indicating a foul ball.

The hitter, George Hendrick, might well have beaten Molitor's throw, because first baseman Cecil Cooper came off the bag. But the confusion prompted an angry outburst from Brewers Manager Harvey Kuenn.

''The umpire at third base put his arms up -- and to me, that indicates foul ball, 'said Kuenn. ''If you're a first baseman, you just catch the ball. You don't worry about touching the bag. '

The Brewers had only Jim Gantner's third-inning double through four innings. Then, in the Cardinals fifth, Lonnie Smith got his first hit of the series after eight unsuccessful at-bats.

It was a one-out double to left-center that should have been a triple had not Smith executed one of his patented slips in rounding first base.

''I probably was too excited about getting a hit, 'said Smith. ''I do that now and then. '

Cooper muffed Dane Iorg's grounder, putting runners at first and third for McGee. Vuckovich's first pitch was ''a slow slider up, 'in catcher Ted Simmons' words, and McGee knocked it several rows into the bleachers. The homer was his second of post-season play.

In the seventh, Smith tripled to right- center and then scored on second baseman Gantner's wild relay throw. Then, with two out, McGee jumped on another pitch by Vuckovich. ''I believe it was a fastball, 'said, adding, 'It could have been a changeup. '

No matter. The score was 5-0. The Cardinals would get another run in the ninth when Vuckovich walked Ozzie Smith with the bases loaded. Hendrick had reached base on catcher's interference, Iorg had doubled and McGee had been walked intentionally before Smith drew a pass.

When Andujar was knocked out of the game in the seventh, Jim Kaat relieved him. Kaat struck out Ben Oglivie, but Thomas got a single. Doug Bair entered to walk pinch-hitter Don Money. And even though Herzog didn't want to, he brought in Bruce Sutter in the seventh inning.

''I was trying to keep from going seven outs with him, 'said Herzog, ''but the game was on the line. '

Still, Herzog said,''I've got to be careful about that. '

Sutter got out of that jam when Ken Oberkfell tightroped the top step of the Cardinal dugout to pull in Charlie Moore's pop foul.

Sutter gave up a two-run homer to Cooper in the eighth. But McGee saved another home run with his specacular ninth-inning play, with Oglivie aboard on Hernandez's error and no one out.

''I just tried to run back and pick up the ball, 'said McGee. ''I timed it right and fortunately, it worked out. '

McGee's leap took his arm over the railing in front of the left-center field seats. The fence is 10 feet high.

''The ball was gone, no question about it, 'said Thomas. ''The only problem was I didn't get it up. If I had got it up, someone way up in the bleachers was going to get a souvenir. '

But McGee was everything to everybody Friday night.

''I don't believe I'm here. Baseball is baseball, 'he said, searching for an explanation. ''Anything can happen at any time. '

While McGee was addressing reporters, he wore a T-shirt reading ''1982 World Series. 'On it was a cartoon of a left-handed batter putting a charge to a ball.

''If some experts had said before the game that Willie McGee was going to hit two home runs, you would have had to bet against it, 'said Vuckovich.

''I'd like to know what Willie McGee's eating -- Wheaties or what? '

McGee is a rookie who often does not play like one. ''The year isn't over yet, 'he said. McGee said he hoped that being a rookie 'will be out of my system in a few days. Then you guys won't be able to call me a rookie. '

PLAYOFF NOTES: Hernandez is nothing for 11 and has messed up three grounders in the field, although he has been charged with just two errors. ''I'm embarrassed, 'he said. ''I should have three errors.

Oberkfell's hitting streak, including post-season play, ended at 13 . . . Friday's crowd of 56,556 was a sports record for Milwaukee County Stadium . . . McGee has all three Cardinals homers in postseason play and could have had a fourth but stopped at third base on a sure-inside-the-park home run against Atlanta . . . Sutter has 11 victoris and 38 saves among the Cardinals' 97 victories this season. 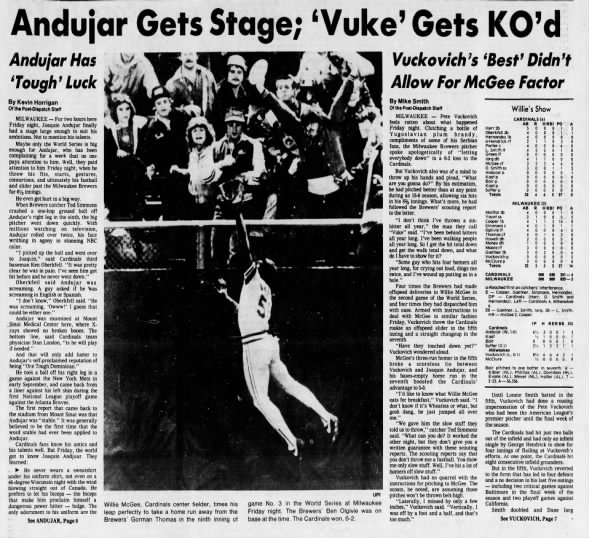