Blue Jays first baseman Vladimir Guerrero Jr., second from left, celebrates with teammates after hitting a two-run home run against the Cardinals on July 26, 2022 in Toronto. 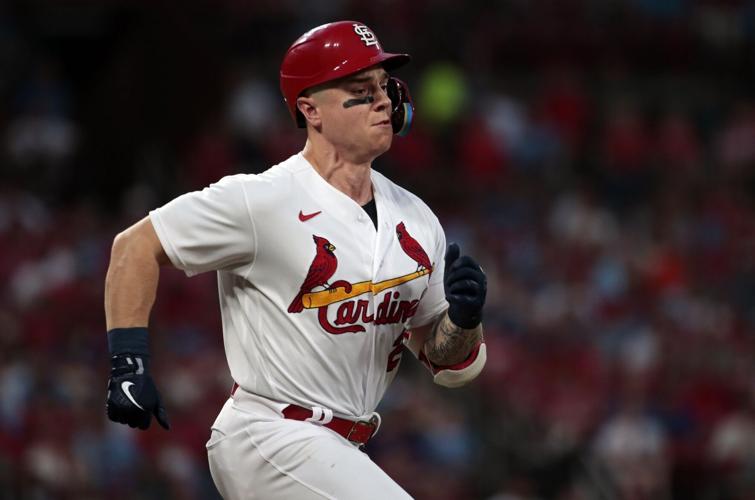 Cardinals outfielder Tyler O'Neill runs out a single in the seventh inning against the Dodgers on July 14, 2022, at Busch Stadium.

TORONTO — Wherever he went Tuesday at Rogers Centre and several times when he tried to go somewhere else, Cardinals outfielder and Canadian Tyler O’Neill was greeted with cheers, shouts, and the request for an autograph. He tossed baseballs to the crowd calling his name in left field. Later, at one end of the visitors’ dugout, he sat on a ledge and signed for a line of fans, including once holding up a jersey before putting a pen to it.

“You want me to sign a Molina jersey? You sure?” he asked.

The fan was sure.

“I’m really feeling a lot of love and a lot of support out there, even in the outfield bleachers,” O’Neill said. “It’s good to get back. When I feel like I have the opportunity, I want to give back. A lot of Blue Jays (fans) know who I am. I’m going to enjoy every second.”

Being back in his home country is the start of a second half where O’Neill hopes to get back to the production from his breakout season. The Cardinals need it.

A 10-3 loss to Toronto on Tuesday at Rogers Centre gave the Cardinals a three-hour seminar on what they’re missing as a contender.

The Cardinals overcame a sketchy first inning to tie the game and haul it into the sixth inning, straining to do so. That was where the Blue Jays flaunted how they can change a game with the power in the lineup, and the Cardinals realized (again) where a contact-oriented pitching staff can go awry when that contact is hard, loud, and lands somewhere even their defense cannot catch it.

It took the Cardinals three singles and a walk to create two runs and tie the game, 3-3. That’s where O’Neill comes in. To simplify and amplify the offense, especially in a two-game series without Nolan Arenado and Paul Goldschmidt, O’Neill’s potential power becomes crucial. Look no further than the Blue Jays, who obliterated one lead and a tie game with three swings, each of them home runs. A year removed from hitting 34 homers, O’Neill has the ability to carry the Cardinals’ lineup some days and, as a complement to the All-Stars, make it a force to be reckoned with. Tuesday’s game ended with the bases loaded and O’Neill driving a pitch to the top of the wall in right field.

George Springer, who hit the game’s decisive grand slam, caught the ball there at the wall to end the game and delay O’Neill’s reward for health and an improving swing by at least one more day.

“He’s going to be a big part of us moving forward,” manager Oliver Marmol said. “The reality is if he hits we’re going to be in good shape.”

Said O’Neill: “I know I can definitely be a catalyst for this team.”

O’Neill’s stop, start, stop again, start again season has brought him to Toronto. In some ways it’s as near to home as he’s been as a big leaguer, but still it’s a 41-hour drive to his hometown in British Columbia. O’Neill grew up three hours from Seattle but close to Toronto because the Blue Jays games were always available on TV. He last visited Toronto in 2019, last played here as an amateur, and a few times visited here for dinners hosted by Canada’s national baseball groups.

This week is not just his first career games against the Blue Jays, but also his first trip to his native Canada in the regular season for a big-league game. He beamed talking about it.

This season hasn’t brought many smiles like that for him.

On the injury list twice already this season, a recent recovery from a hamstring injury was prolonged when he was hit in the hand and had to deal with a wrist injury. The hamstring injury came after back-to-back three-hit games in Boston, and he returns to start the second half with a home run Saturday and three hits in his first 12 at-bats. The homer was his fifth of the season in the Cardinals’ first 97 games, and the hits inched his batting average to .239.

“That’s the cards that I drew this year,” O’Neill said. “Didn’t get off to a favorable start, and being hurt and all that stuff going on. I’m just trying to look forward and make the most I can. I know I have the best baseball ahead.”

This sojourn to Canada is more than a test of the lineup without Arenado and Goldschmidt unavailable – they could not travel internationally due to restrictions for people not vaccinated against the COVID-19 virus. It’s a challenge against the hottest lineup in baseball.

As Andre Pallante prepared for Tuesday’s start, the rookie reviewed Toronto’s recent games. That included their 28-run outburst against Boston at Fenway Park. Toronto scored the most runs ever in a game against a Red Sox club, and they swept the Sox with 40 and 51 hits in three days. That was the video Pallante had to study.

“You look at the at-bats and see, OK, what were they hitting? What did they not hit?” Pallante said. “Score 28 runs, (and) it’s kind of hard to find. But you go to a different game and you kind of learn from something like that.”

The Blue Jays stung Pallante for seven hits in their first 10 batters. But the thunder in Toronto’s lineup was clear quickly. Dylan Carlson’ solo homer in the first claimed a 1-0 lead for the Cardinals, and it was erased less than eight pitches into the bottom of the first. Vladimir Guerrero Jr. followed Springer’s leadoff single with a two-run homer that seized the lead for Toronto. Two of Toronto’s first three hits were extra bases and three runs came from them. In the second inning, Pallante allowed two singles.

The inning did not produce a run.

Pallante got a double play and retired the seven hitters he faced, too.

“You have to take every hitter seriously,” the right-hander said. “It’s learning how to keep the guys from stringing hits together. Gave up a two-run homer. Usually that’s not my game. Learning how to not string together hits is something that is very important to me and my success.”

Stringing together hits is the basis of success for the Cardinals’ offense.

One of the better lineups in baseball when it comes to average and on-base percentage, the Cardinals sink when it comes to slugging. The result is an offense that leans heavily on its ability to get on base, its exceptional ability to run the bases, and a bona fide MVP season from Goldschmidt because he can clear the bases. At his best, O’Neill, who received MVP votes last season, adds a dimension to the lineup that can create innings line the Blue Jays had Tuesday.

Down by a run, Toronto got the homer from Guerrero to flip the first-inning on the Cardinals. When the Cardinals got into a bind because of the lack of a strikeout option out of the bullpen and a pitching staff built around contact, there was Springer with a grand slam to capitalize. The Cardinals got into trouble with a couple of walks from right-handed reliever Jordan Hicks, and then Springer pounced on a 3-2 sinker from Junior Fernandez for the seventh grand slam of his career. Two batters later, All-Star Alejandro Kirk added a solo homer of Fernandez to widen the lead and assure the rout.

Seven of the Jays’ 10 runs came on homers.

Ten of 10 involved an extra-base hits.

One of the three the Cardinals scored did.

And that came into play in the ninth. The Cardinals were down by seven runs with the slimmest of chances to rally about Toronto before it won its seventh straight. A single and two walks loaded the bases. The Cardinals had two cracks at a swing that would change the look of the game, tighten that score, and who knows where it would go next. They did not get a hit, let alone the damage that would create drama. In the final at-bat of the game, O’Neill sent a pitch deep and carrying to the right-field wall. The ball was exactly what the Cardinals hope O’Neill is.

Close to making a difference.

“I just want to come in and contribute where ever Oli is going to put me,” O’Neill said. “Find my rhythm again. Find my flow, and trust my stuff. That’s what I was doing last year. Trusting my hands. Trust my eyes to play. I’ll get there.”

Veteran starter and Pujols carry Cardinals to 6-1 victory, split series in Toronto. Says Wainwright: He could 'prove that I still had what it takes to be a great pitcher in this game.'

Goold: Cardinals looking at options to change the look of rotation, bring in strikeouts

Check out the hits from the weekly Cardinals chat with Post-Dispatch baseball writer Derrick Goold.

'I wouldn’t forgive myself if I had one chance to be here,' says reliever after a 24-hour odyssey through Cincinnati, Miami, and Detroit to renew passport and reach Canada.

Cardinals loaded the bases in the ninth inning, but Springer ends the game with a catch at the wall to keep a game, once tied in the sixth, out of reach for Cardinals.

Goold: There is a way for the Cardinals to keep all their top prospects

Check out the hits from the weekly Cardinals chat with Post-Dispatch baseball writer Derrick Goold.

As any newcomer from the minors or another major-league club makes his way for the first time from the players’ parking lot to the Cardinals clubhouse, he is enveloped in history and greeted by its expectation.

Blue Jays first baseman Vladimir Guerrero Jr., second from left, celebrates with teammates after hitting a two-run home run against the Cardinals on July 26, 2022 in Toronto.

Cardinals outfielder Tyler O'Neill runs out a single in the seventh inning against the Dodgers on July 14, 2022, at Busch Stadium.