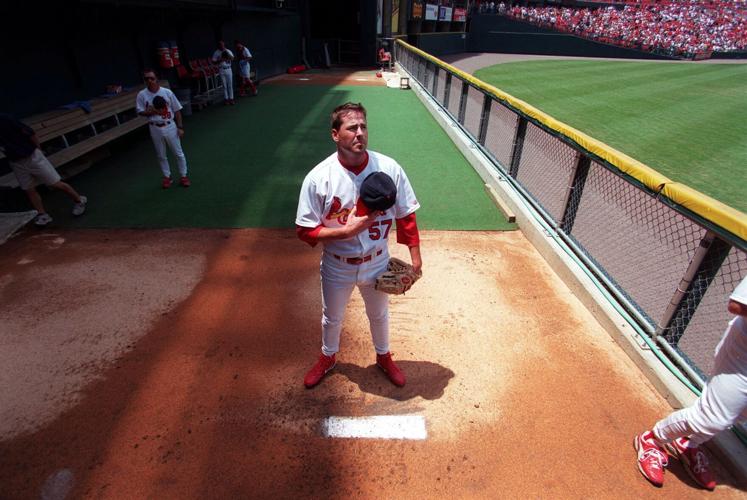 Cardinals starting pitcher Darryl Kile stands at attention during the playing of the national anthem in the bullpen before his start against the Houston Astros on Sunday, 2 July, 2000. Post-Dispatch archive photo by Chris Lee 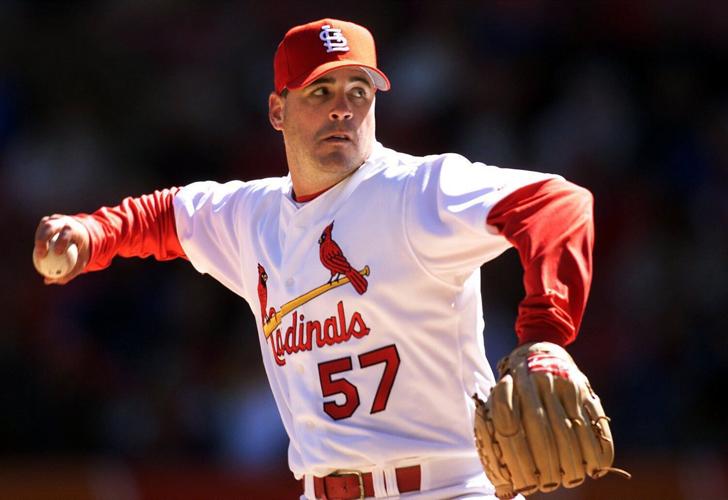 Darryl Kile delivers to the plate in an April 8, 2000, game against the Brewers at Busch Stadium. 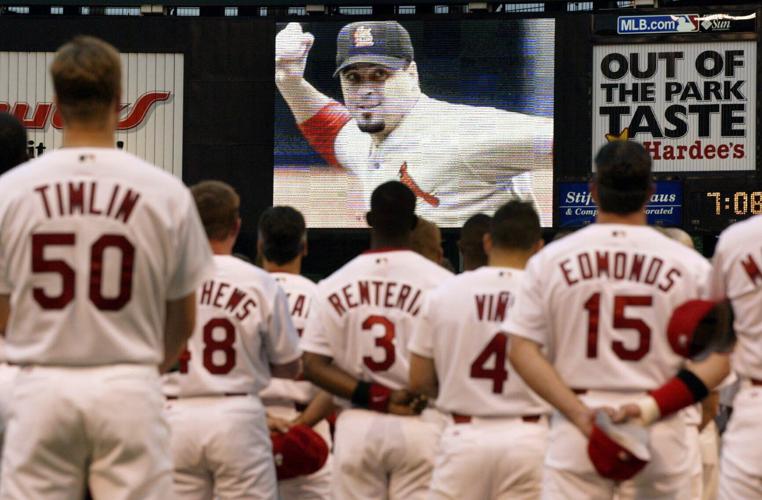 Cardinals players watch a video tribute to Darryl Kile before a June 25, 2002, game against Milwaukee at Busch Stadium.

Benjamin Hochman is a sports columnist for the St. Louis Post-Dispatch

Earlier that 2002 day, they attended the memorial service for Jack Buck, the legendary radio voice of their team, the St. Louis Cardinals.

“Whenever you’re faced with the fragile nature of life, you just kind of have those conversations,” said Matheny, the manager of the Kansas City Royals, by phone this past week. “And I’ll never forget, I was just talking about the impact that Mr. Jack Buck had on so many different people and how in this game we have that opportunity. …

“It just stuck out in my mind that we were having a conversation about life. Baseball players normally don’t slow down enough to talk about stuff like that. But we did. And that’s why it’s stuck out, because who would have ever thought during that conversation that one of us would not be making that trip back.”

It’s been 20 years. Two decades since June of 2002, when the pitcher Kile unexpectedly died in his Chicago hotel room on June 22, four days after Buck passed. The loss of Buck was anticipated but still gut-wrenching; the loss of Kile was a sucker punch to the gut — a pain from which many haven’t fully recovered.

Buck was 77. Kile was 33. Both were husbands and fathers. For St. Louis fans, there was simultaneous mourning — a gripping grief and disbelief. It was one of those times where you remember where you were when you heard.

Buck’s voice from the ballpark was this conduit of innocence. Over the KMOX airwaves, he connected the Cardinals to the fans and families. Buck himself felt like family. He was the orator of history, the narrator of lullabies.

And Kile was an active Cardinal, the lifeblood of the pitching staff. In his third season for St. Louis, he had been an All-Star, a 20-game winner and partly responsible for the resuscitation of franchise excellence. See, from 1988-1999, the Cardinals made the playoffs just once, but they made the playoffs in all three seasons Kile pitched for the club (2000-2002).

The third postseason appearance was an homage to No. 57 himself — the Cards took over first place the day before Buck died, and after they lost Kile, they won 57 games en route to October. St. Louis won the National League Division Series against Arizona, but lost the pennant to San Francisco.

“When we got to the field that year, it was like — we’re playing this one for Darryl,” said 2002 closer Jason Isringhausen by phone this past week. “This is the way Darryl would want us to play. Because I don’t think Darryl ever missed a start, to be honest with you. So it was just a different vibe, something that we’re playing for, something extra.”

Isringhausen was raised 42 miles from Busch Stadium, from where Buck’s broadcasts wafted into Cardinals Country. A native of Brighton, Ill., “Izzy” admired Bruce Sutter, the Cardinals closer whose 1982 strikeout inspired Buck’s famous: “That’s a winner — a World Series winner for the Cardinals!”

In 1995, Isringhausen made the majors. He was a New York Met. Before a game in St. Louis, he was told someone wanted to interview him, “‘And I’m like, ‘Yeah, whatever.’ And they said it was Jack Buck in the dugout, and I’m like: ‘Oh my God.’

“I still remember calling mom and dad afterwards and being so excited to say to Jack Buck actually talked to me, and we had a full conversation. … It’s just one of those being from St. Louis or the St. Louis area. Those voices were on the radio every night at 7 o’clock.”

Isringhausen would become a Cardinal in 2002. He’d finish in St. Louis with the most saves in franchise history. Like Sutter, the closer is a member of the Cardinals Hall of Fame. During the 2002 season, he admired his new teammate Kile because “Darryl was one of the guys who had the other starters watch each other’s (pregame) bullpens. He was the glue that held that starting group together.”

The catcher Matheny played in the majors from 1994-2006. He said, unwaveringly, that Kile was “the greatest teammate I ever had. And I would’ve said this had he not passed. There was one reason — because of his selflessness.”

Before the game on Saturday, June 22, 2002, word spread around the Wrigley Field visiting clubhouse that Kile hadn’t arrived yet. Soon, rumors spread around Wrigley Field. Ultimately, Cardinals manager Tony La Russa broke the news to his team, as his team broke down.

“It’s the first time I’d ever been around, like, macho men or grown men that cried,” Isringhausen said. “It was just a very somber, sobering moment. Watching guys you go to battle with lose that macho-ness — and the human element comes out, and you’re hugging each other.”

Time stopped. In the trainer’s room, Matheny looked down at his watch. It was a gift from Kile. Matheny pulled out the stem, freezing the time — and the date — on the watch.

With a microphone on the field, Cubs catcher Joe Girardi made an announcement to the fans — the Saturday game would not be played, due to “a tragedy in the Cardinals family.”

The Cardinals returned to Wrigley. Kile was supposed to pitch. Jason Simontacchi started in the loss. Two Kile jerseys hung inside the team’s dugout.

Cardinals photographer Scott Rovak captured a poignant picture of Matheny. It’s an image Matheny has painted on a canvas. And an image forever frozen in Isringhausen’s mind, as well as that of so many other Cardinals and Cardinals fans: Matheny’s left hand placed upon the KILE nameplate with the No. 57 written thickly in marker on Matheny’s left arm. The catcher looked down into the dugout stairwell. You couldn’t see his face. And on the right sleeve of Kile’s jersey was a small black patch that said “JFB” in white.

Just five days prior, Matheny caught Kile. The workhorse pitched 7 2/3 innings and allowed just one run in the win. It was Kile’s last start. It was the day Buck died.

Two days after the Kile start, Kile sat with teammates at the memorial service at Busch, while Matheny spoke to the thousands in attendance. Recalling Buck’s call when Mark McGwire tied Roger Maris with 61 homers, Matheny said: “Mr. Buck, if I may borrow your words, pardon us while we stand and applaud.”

The Cards then played that day.

After the game, Matheny and Kile rode to the airport.

Darryl Kile pitches in May 2002

Darryl Kile warms up after service for Jack Buck

Cardinals pray, try to play as they struggle in defeat

Cards still are grieving but try to regain focus

Cardinals fans, teammates join in a tribute to No. 57

The team that could

After grueling week, Buck is happy to broadcast game

"We love you and we miss you"

The team that could

Kannon Kile plays on the field with other Cardinals

Benjamin Hochman is a sports columnist for the St. Louis Post-Dispatch

Commish & the Cardinals: The day they played one for Darryl Kile

You never have heard Wrigley Field so quiet as it was on June 23, 2002. Fans from both sides still were reeling over the news of Darryl Kile’s death the day before.

Cardinals starting pitcher Darryl Kile stands at attention during the playing of the national anthem in the bullpen before his start against the Houston Astros on Sunday, 2 July, 2000. Post-Dispatch archive photo by Chris Lee

Darryl Kile delivers to the plate in an April 8, 2000, game against the Brewers at Busch Stadium.

Cardinals players watch a video tribute to Darryl Kile before a June 25, 2002, game against Milwaukee at Busch Stadium.