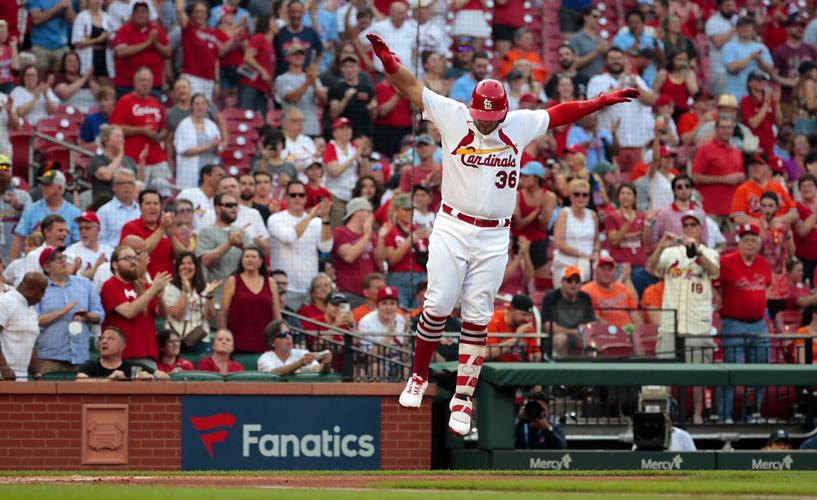 St. Louis Cardinals Juan Yepez soars into the air on the third baseline as he makes his way around the bases after hitting a solo home run in the second inning against the Baltimore Orioles on Wednesday, May 11, 2022 at Busch Stadium. Photo by Robert Cohen, rcohen@post-dispatch.com 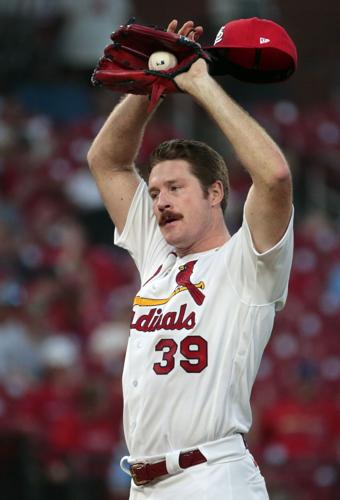 St. Louis Cardinals pitcher Miles Mikolas works the fourth inning on a steamy day at Busch Stadium against the Baltimore Orioles on Wednesday, May 11, 2022. Photo by Robert Cohen, rcohen@post-dispatch.com

Once it became apparent that Cardinals ace Adam Wainwright, on the COVID injured list, could not start Tuesday in the opener of a three-game set here with Baltimore, Cardinals manager Oliver Marmol had the option of using Miles Mikolas, his best starter this season, on regular four days’ rest because of an off day the Cardinals had on Monday.

Marmol took the “long-game” approach and elected to give Mikolas and the rest of the rotation an extra day of rest between starts this week so that dividends might accrue later in the season. The Cardinals used a succession of relievers unsuccessfully in a loss on Tuesday but Mikolas, strong as he could be, held the Orioles to four hits and one run over seven innings in a 10-1 victory on Wednesday night at Busch Stadium.

Would Mikolas have done that on Tuesday? We won’t know, but what we do know is that he has allowed only five runs in his past 38 2/3 innings for an ERA of 1.16. Of the 21 outs Mikolas recorded Wednesday, 14 were on the ground as he handled the Orioles with his slider as much as anything else.

Mikolas gave credit to Yadier Molina for his “proficient pitch calling,” and to his defense. “Keep the ball down and let the defense do their thing,” he said.

“This is a very, very good version of Mikolas,” said Marmol. “You can tell he’s in absolute control of every at-bat and it looks really good.”

Agreeing with his manager, Mikolas said, “I think the best version of myself is quick outs, down in the zone, lots of strikes. Strikeouts are super sexy but it’s not something I’m really known for.”

Mikolas said he would like his fastball to “tick a little higher, but that’s an ego thing.”

But Baltimore manager Brandon Hyde seemed terribly impressed. “He got the lead and put it on cruise control,” said Hyde. “He’s got multiple pitches he can attack you with. Incredibly unpredictable.”

Marmol said he would make the same decision again, to hold back Mikolas and the other starters a day. “I went back and forth quite a bit when we were making that decision,” said Marmol. “At the end of the day ... the ‘long game’ of keeping those guys healthy was more important.”

The Cardinals, starved for extra-base hits earlier in the season, had a season-high seven of them on Wednesday, including a home run by rookie Juan Yepez and two doubles by another rookie, Brendan Donovan. “One through nine (in the batting order), they were relentless,” said Marmol. “Ten runs later, we were feeling pretty good about it.”

Yepez got the extension of his hitting streak out of the way early. Entering the game with a six-game run, Yepez pounded a 2-1, second-inning slider from Spenser Watkins over the Baltimore bullpen in left for his second homer and first at Busch Stadium.

Donovan, who had hit his first big-league homer on Tuesday, stroked his first major-league double to make it a three-run inning. Donovan’s two-out hit to right center scored Molina and Corey Dickerson, the second of whom also had doubled.

The Cardinals, who snapped a losing streak at three games, then ran the count to 7-0 as Paul Goldschmidt, just missing a homer to left center, doubled in two runs in a four-run fourth. Tommy Edman singled home the first run of the inning, also with two out, after Harrison Bader singled and Donovan walked.

Both Donovan and Edman moved up a base after Edman’s single on left fielder Anthony Santander’s errant throw home.

Following Goldschmidt’s double, Nolan Arenado, the National League Player of the Month for April who had been nothing for his past 13, legged out a double to right center.

Through four innings, the Cardinals had eight hits from eight players, with only Molina missing from the group. Goldschmidt was the first player to two hits when he singled in the sixth to score Donovan, who had drawn his second walk of the night.

“That guy ... I was looking at his numbers and he was amazing,” Yepez said.

For a week, so, too, has Yepez been amazing.

Goldschmidt said, “He’s doing it all. Hitting the ball the other way. Hitting for power. It’s been great — something we needed.”

“Any time you bring that level of production, it changes the energy,” Marmol said. “Going to the plate ... each at-bat is personal to (Yepez). You can tell that the kid’s been told for a long time that this isn’t possible and he’s enjoying proving a lot of people wrong.”

Yepez, a native of Venezuela who grew up idolizing countryman and future Hall of Famer Miguel Cabrera, said, “This is unbelievable. If you tell me this five years ago, I say, ‘No, you’re lying.’

“It’s been a long way. Eight years in the minor leagues and to finally be here and having success, like I said, is a dream. There were a lot of people that didn’t believe in me. Now they’re seeing me here and I just say thanks to them because they actually gave me more motivation to work harder. And now being here is like proving them wrong.”

Mikolas, after throwing 69 strikes out of 98 pitches and running only one three-ball count, yielded in the eighth to rookie Jake Walsh, just recalled from Memphis. Walsh fanned four in two innings.

Donovan’s second double in the eighth set up Edman and pinch hitter Kramer Robertson for run-scoring groundouts for the final two Cardinals runs. It was Robertson’s first big-league at-bat and his last for a while as he will be returned to Memphis Thursday when Edmundo Sosa is expected to come off the injured list.

The three extra-base hits by Donovan, who played shortstop, in the past two days were only one fewer than the total for Paul DeJong, the slumping regular shortstop who was optioned to Memphis on Tuesday.

“We talked a decent amount this spring,” said Marmol, “about this group of players coming up — that there was something about them that was just really fearless. They don’t back down. They don’t make the moment any bigger than what it really is.”

Cardinals notebook: O'Neill loses his arbitration case but glad 'burden is lifted' from his shoulders

O'Neill loses arbitration case with Cardinals; Walsh up, Whitley down

Photos: Cardinals fly past the Orioles 10-1

Rick Hummel is a Cardinals beat writer for the St. Louis Post-Dispatch.

St. Louis Cardinals Juan Yepez soars into the air on the third baseline as he makes his way around the bases after hitting a solo home run in the second inning against the Baltimore Orioles on Wednesday, May 11, 2022 at Busch Stadium. Photo by Robert Cohen, rcohen@post-dispatch.com

St. Louis Cardinals pitcher Miles Mikolas works the fourth inning on a steamy day at Busch Stadium against the Baltimore Orioles on Wednesday, May 11, 2022. Photo by Robert Cohen, rcohen@post-dispatch.com