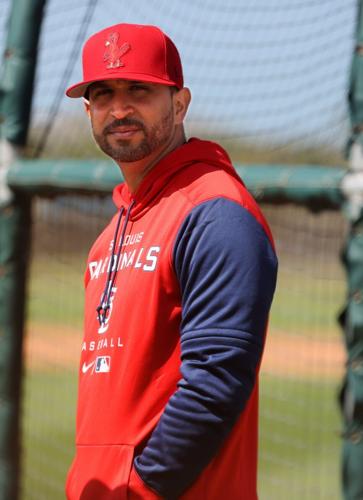 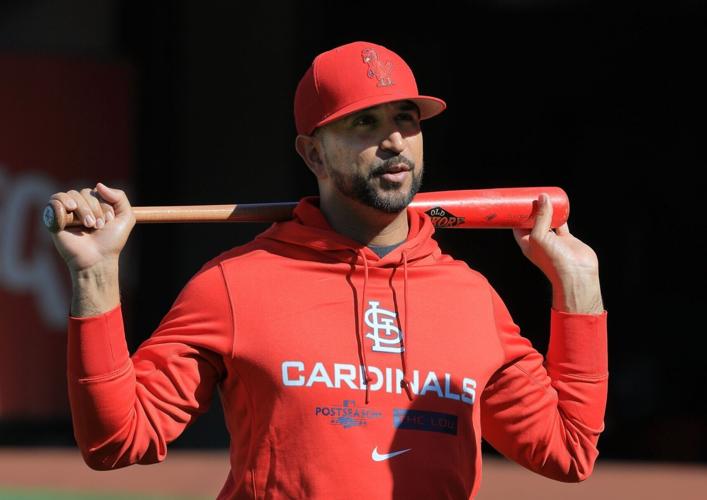 Cardinals manager Oliver Marmol supervises a practice session on Thursday, Oct. 6, 2022, the day before the start of the team's National League Wild-Card series against the Phillies at Busch Stadium.

There have been sightings at a Blues game, around the arena for a SLU men’s basketball game, and a true eagle-eyed birdwatcher might even have glimpsed him inspecting the changing leaves and flora at the Missouri Botanical Garden.

Cardinals manager Oliver Marmol has been spotted around town since the end of the their season because, after his first full season in the role, his family decided to call St. Louis home for the offseason. As they’ve explored the city, rink side to courtside to countryside, and even stopped a few times to smell the roses, they’ve learned when it comes to baseball in St. Louis there is no offseason.

Great to have Oli Marmol and his family here at Chaifetz tonight! #TeamSTL | #Billikens | #STLCards pic.twitter.com/twXmYAzMYP

Even picking up dinner comes with an extra slice of commentary.

“Go to the pizza shop and it’s like, ‘We can’t wait for the season to start,’” Marmol said. “Ah, it ended last week. You definitely feel it regardless of where you go. That’s the part that’s cool. Look, losing in the playoffs (stunk). The way we lost (stunk), right? Every part of it. But the responsibility and the accountability of it — this is amazing. We didn’t reach our goal, and everyone is feeling that way.”

At the same table he’s been using for Zoom meetings and conference calls this past month, Marmol spoke about his offseason so far and his plans for the offseason ahead after the Cardinals’ division-title season ended with a swift exit from the playoffs.

Marmol finalized his staff, replacing former Cardinal and current Miami manager Skip Schumaker at bench coach with former Cardinal and newest Cardinals Hall of Fame Matt Holliday. The Cardinals promoted Dusty Blake to pitching coach and Turner Ward to hitting coach, and already Marmol said they have plans to visit and work individually with players in the coming months. Marmol will hit the road too, using St. Louis as his base to fan out for face-to-face meetings with some players.

Nearly a year ago, newly and suddenly promoted to Cardinals manager, Marmol had only a few weeks to talk to players before Major League Baseball’s lockout eliminated any contact for 99 days. They didn’t want to wait nine this offseason.

They’ll be “hands on” to retool Paul DeJong’s swing.

They’ll be “hands on” to shape Genesis Cabrera’s off-speed pitches.

“A hands-on approach this offseason is exciting,” Marmol said.

While Marmol’s “hands-on” offseason began by embracing St. Louis, an early phase for pitchers and the pitching coaches will be getting a grip on suggested “pitch shaping” and pitch usage. Jake Woodford received similar instruction during the season as the Cardinals used data to reshape his slider — its use, its release, its spin — for prolonged effectiveness. Now leading the coaching of the pitching staff, Blake brings that advanced and analytic eye to crafting pitches, and the winter is primed for experiments with new shapes, reimagined sequences, or test-driving new pitches that blossom in spring.

Helping lefty Cabrera rediscover his swing-and-miss execution is one example as the team sorts the numbers to learn if he needs another pitch, needs to change the break on his pitch, or adjust the use of his fastball.

“That is what this time is for because there is no line at the end of the day that says you (failed) at it or you were good at it,” Marmol said. “Let’s just build it.”

That’s also the plan for DeJong as the Cardinals construct a swing overhaul for him at the Roger Dean Stadium facility in Jupiter, Florida. Ward will be present for some of it — at designated checkpoints — and at work, in person, with other hitters. The offseason also includes a regimen for players when it comes to performance, strength, fitness, and movement, such as the workouts designed for Tyler O’Neill, Alec Burleson and others.

Marmol plans a conversation tour of sorts to reach out to younger players about the next phase of their careers — as Brendan Donovan and Lars Nootbaar look to build on success and face the heightened expectations that await them.

“Yes, there’s a baseline for skill, but a big separator at this level is how people approach the mental side of the game and a lot of that is instilled in confidence and adversity and the foundation you have for how you handle both,” Marmol said. “But how do you handle success? I don’t think that’s talked about enough. Nootbaar had success, right? Now he’s going to have to repeat it. How do you handle that? How do you handle Busch Stadium knowing you’re good and going, ‘Hey, do it again.’”

These were the kinds of conversations he could not have last winter during the lockout and when his first spring training started at warp speed, there wasn’t much time for them.

This winter, hands on includes outreach.

“I think it’s important to set expectations for certain guys, and it’s better done face to face so that they understand how real it is, how real our belief in what they’re capable of doing is,” Marmol said. “I want them to understand what we think is possible for them, and I think that’s always helpful face to face, especially instilling confidence in the younger guys we’re getting ready to count on. (Going to see them) is important — a little more than (saying,) 'You’re important to what we’re doing, and I need you to fly here.'”

Being there, meeting someone where they are was part of why the Marmols, Oli and Amber, his wife, stayed put after the season and did not return to their home in Florida.

During the season, they discovered places that delighted their two young daughters, and they sought time to explore St. Louis, from revisiting the Magic House to seeing Shaw Boulevard’s Missouri Botanical Gardens. They wanted to soak in the sports scene, sit in another team’s seats.

Amber said the “leaves changing, the cooler weather, the pumpkin patches,” were all appealing to a family of Florida kids.

They decorated pumpkins, and Amber and Oli both aced their carvings. Oli’s was the silhouette of an owl.

And he’s had a chance to feel, to live what he’s heard.

It’s what Paul Goldschmidt described last week after winning the National League MVP award. His family also decided to start the offseason in St. Louis, and he described what baseball tradition and the Cardinals’ success mean to the region, using a notable pronoun: “That is something we don’t take lightly in St. Louis.”

Before his first home game as manager, Marmol told the story of being woken up that morning by a cardinal (lower-case c, feathered) at his window, a particularly loud and persistent cardinal. He swore it to be true. Last week, Marmol stepped away briefly from an interview, and as this reporter waited, on cue, a red bird landed on a deck chair right outside the nearest window. It offered no comment but its presence. Just another cardinal sighting.

Even out of season, they’re still in mind.

“If the city was OK with what happened, how our season ended — but it’s not,” Marmol said. “Let’s be super clear: The ending (stinks). You feel that responsibility. You feel that accountability of not reaching the last game of the World Series. If I didn’t have to answer those questions, I don’t think I would do this. It’s what gets me up in the morning. That becomes part of the motivation.”

BenFred: What happened to Paul Goldschmidt in September? The National League MVP is on the case

Best Podcast in Baseball: Dominant Astros are World Series champs. But are they Fall Classics like great Cardinals clubs?

Going back to 2014, this is where the Cardinals have spent the most in free agency.

Agreement was added on as a 10-year, $10 million sweetener to Pujols' free-agent contract with LA, and he'll "honor" it, likely as player mentor, ambassador.

Hall of Famer Rick Hummel says farewell, reflects on 51 years at the Post-Dispatch

Long-time Post-Dispatch reporter and Baseball Hall of Fame baseball writer Rick Hummel says goodbye, looks back on more than half a century in St. Louis.

Hummel: I will never forget the people I hope to continue to inform and entertain

On and off the field, Cardinals’ 1999 class saw the beginning of Albert Pujols’ legacy

Some of the 1999 Cardinals draft picks got to know who Albert Pujols was before the slugger hit his way into the spotlight.

Oscar Mercado was a second-round pick by the Cardinals in the 2013 draft and was traded to Cleveland in 2018, where he made his debut.

Carlos Beltran is among three former Cardinals to make their debut on this year's Hall of Fame ballot.

Cardinals manager Oliver Marmol supervises a practice session on Thursday, Oct. 6, 2022, the day before the start of the team's National League Wild-Card series against the Phillies at Busch Stadium. 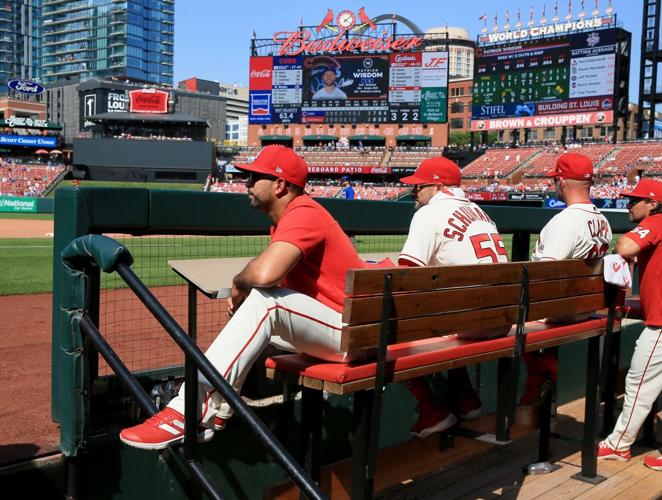 St. Louis Cardinals manager Oliver Marmol (left) watches the action on the field in the eighth inning during a game between the Chicago Cubs and St. Louis Cardinals at Busch Stadium in St. Louis on Saturday, June 25, 2022. Photo by David Carson, dcarson@post-dispatch.com 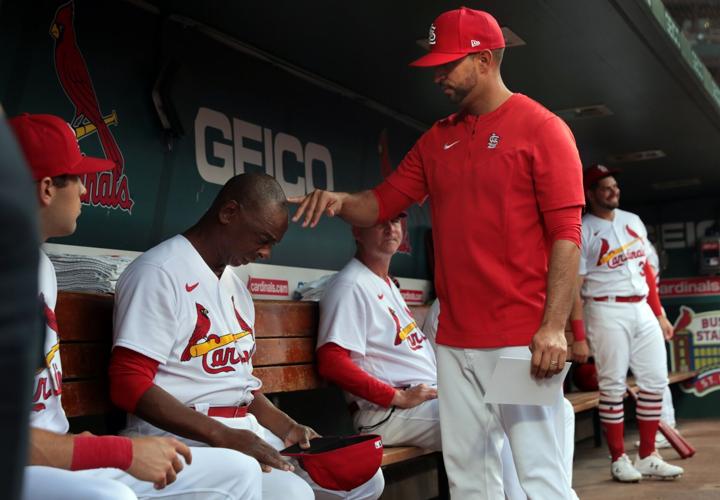 St. Louis Cardinals manager Oliver Marmol rubs the head of coach WIllie McGee before the first of a three game series against the San Francisco Giants on Friday, May 13, 2022 at Busch Stadium. Photo by Robert Cohen, rcohen@post-dispatch.com