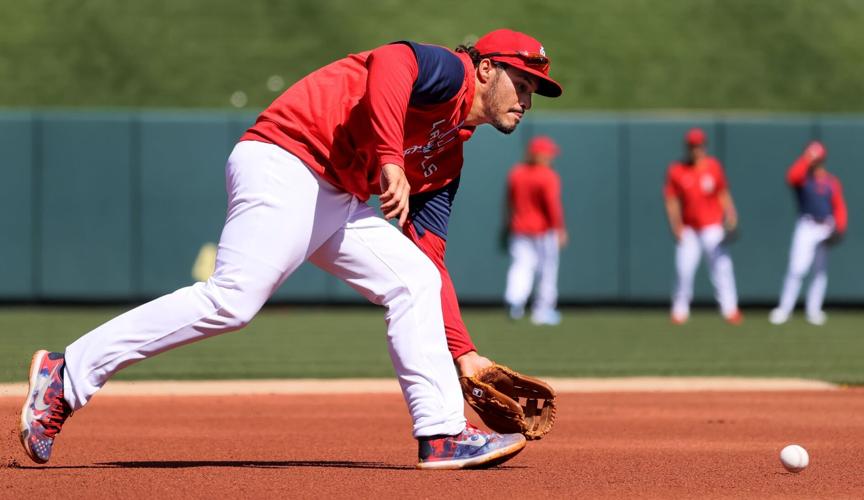 St. Louis Cardinal infielder Nolan Arenado picks up a ground ball on Wednesday, April 6, 2022, during workouts at Busch Stadium before the team's opening day game against the Pirates on Thursday. Photo by Christian Gooden, cgooden@post-dispatch.com 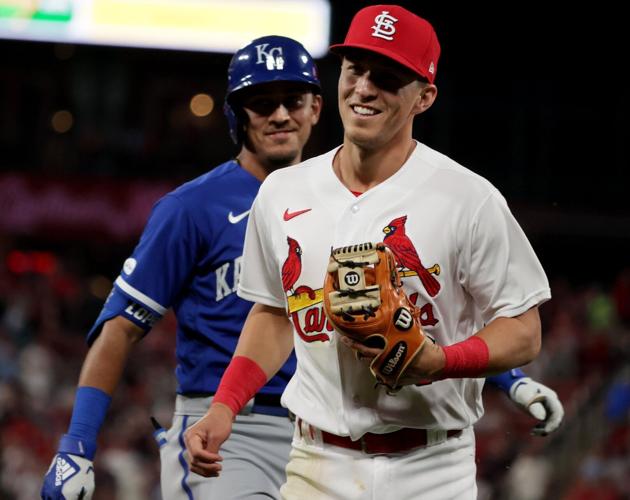 Cardinals infielder Tommy Edman reacts to a comment by Royals infielder Nicky Lopez on Tuesday, April 12, 2022, after Edman made a diving catch to rob Lopez of a hit in the fourth inning of a game at Busch Stadium in St. Louis. Photo by Christian Gooden, cgooden@post-dispatch.com

The St. Louis Cardinals are off to a good start with wins in five of their first eight games. But there is still reason to believe this team can be better, particularly that its chief strength — elite defense — has not yet been realized.

Cardinals D has yet to pay dividends

Much has been said about the Cardinals' defense being their front foot this season. But so far in the young season, the team's defensive prowess has not shown up in advanced statistics.

Defensive statistics are notoriously finicky, and they take longer to materialize than offensive statistics, but so far the Cardinals are in the middle of the pack in both fielding percentage, at 15th in baseball, and defensive runs saved, at 14th with exactly 0.

Still, the defense hasn't yet hurt them, unlike the Braves, Tigers, and Guardians, who have defensive runs saved values of -2 — meaning defensive lapses have translated to two additional runs scored for opponents. But as the sample size increases, so, too, should the Cardinals defensive ranking.

Some say that small ball is dead, but don't tell the Cardinals that. While strikeout rates rise throughout the league, the Cardinals sit at the very bottom in terms of hitter strikeout rate. Major League Baseball as a whole is striking out in 23% of its trips to the plate, whereas the Cardinals are significantly lower than that number, seeing strike three in on only 17% of plate appearances. The Baltimore Orioles top the league with a 29% K-rate.

Unfortunately, the Cardinals seem to be facing a bit of bad luck, as despite having the extremely low K-rate, their batting average on balls in play (or BABIP) is only .271, or 20th best in baseball.

Albert has a positive WAR

Wins above replacement is a cumulative stat and is often of little value early in the season, but it's worth noting that Albert Pujols is currently an above-replacement level player for the first time since 2016. A hot start is just that — a start — but it is undeniable that the early returns for Pujols have paid off.

The test will be the dog days of June, July, and August. But for now, Albert Pujols is having a bit of a redbird renaissance.

Arenado is the first player to 1 WAR

Speaking of WAR, Nolan Arenado is the first player in the National League and one of two in baseball to reach 1 WAR.

The star third baseman is combining a keen eye at the plate with significant power to fuel his hot start. Having a walk rate higher than his K-rate, and is swinging at a career low 29% of pitches outside of the strike zone.

Fielding Independent Pitching aims to eliminate factors outside a pitcher's control — like slow fielders with limited range — by accounting only for certain outcomes, such as strikeouts, home runs and walk.

Over time, for most pitchers, FIP will land in a similar spot as the pitcher's earned run average. If those two numbers are drastically different, it indicates that the pitcher has had some especially good — or bad — batted ball luck.

As of Tuesday afternoon, Cardinals starting pitchers had an earned run average of 4.95, but a much lower FIP of 3.18. Those numbers are due for smoothing. New addition Steven Matz, for example, has a 7.27 ERA but a 2.40 FIP.

In short, the Cardinals' starting pitching has not been very good to start the season, but there is cause for optimism.

Carter Chapley is the digital producer at STL Pinch Hits.

Cardinals rookie infielder Brendan Donovan made the most of his day off in New York City.

Despite a homers dry spell, Cardinals have no immediate plan to call on Gorman

The Class AAA Memphis second baseman, is tied for the professional baseball lead with 10 homers, including two on Wednesday.

All things considered, Cardinals' manager has enjoyed his first month

Quiz: How well do you know Yadier Molina?

Celebrate the recent milestone by the Cardinals catcher with a look back at his career.

'I don't see anybody breaking that,' Manager Oliver Marmol said after the Cardinals' win.

Hummel: What does the future hold for DeJong, Dickerson and Reyes?

Check out the highlights from Rick Hummel’s Cardinals chat with readers.

The Cardinals have gotten very important contributions from their rookie callups, making themselves invaluable to the team and raising some important questions about the roster.

Despite having a decent week, the Reds capped it off with finding a new and creative way to lose a game. Meanwhile, the status quo held elsewhere in the standings.

With prospect Nolan Gorman at second base, Tommy Edman will move over to shortstop.

St. Louis Cardinal infielder Nolan Arenado picks up a ground ball on Wednesday, April 6, 2022, during workouts at Busch Stadium before the team's opening day game against the Pirates on Thursday. Photo by Christian Gooden, cgooden@post-dispatch.com

Cardinals infielder Tommy Edman reacts to a comment by Royals infielder Nicky Lopez on Tuesday, April 12, 2022, after Edman made a diving catch to rob Lopez of a hit in the fourth inning of a game at Busch Stadium in St. Louis. Photo by Christian Gooden, cgooden@post-dispatch.com